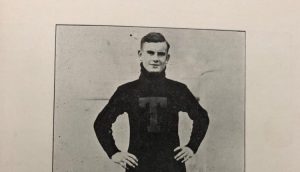 Sonora, CA – Plans are in place to celebrate Sonora High’s latest Athletic Hall of Fame class, whose accomplishments span back from 2011 to pre-1915.

Sonora High Foundation officials, who this week released the list of 13 athletes and one supporter-honoree, say the venue for the open-to-the-public installation dinner and ceremony will be the Black Oak Casino Resort Hotel banquet room, adding that folks should save the date and mark their calendars for Saturday, Oct. 5.

To view honorees’ photos curated by Rick Francis on behalf of the foundation, click into the image box slideshow. Their bios follow below…

Former Tuolumne County Assessor Frank Baker, who held that post from 1938 to 1946, also notably serving as Exalted Ruler for the Sonora Elks Lodge from 1942-43, was truly a star track athlete. A member of the Class of 1915 at Tuolumne County High, in his senior year he represented the school at the Panama Pacific International Exposition, held in San Francisco.

Along with winning a gold medal in the broad jump — now known as the long jump — he claimed silver in the 220-yard dash and placed 4th in the 50-yard dash. It was an additional challenge that he ran in a weight division that required runners to be 100 pounds or less, which coaches recounted that he barely made. Because of his leadership, his team selected him as their captain.

Jim participated and lettered in football, basketball, and track and was respectively a starting receiver, an all-league basketball player and an outstanding high jumper in track. His excellent hands helped give the Wildcats a shot for the VOL football championship against Oakdale, although the team fell one touchdown short.

In perhaps his strongest sport, Jim was known as one of the best pure shooters in the Valley Oak League and led his team to the first VOL championship. A member of the all-league squad, he was additionally selected to the Modesto Bee-KBEE All-Star team. In track, he qualified for the Sac-Joaquin Section meet in the high jump. After high school, Jim played two years for Modesto Junior College in basketball and high jumped for the track team.

Gary, who picked up tennis during his freshman year, became an outstanding player by the time he was a junior, winning 12-4. His senior year record went 19-1, and he became known that year as one of the best servers in the league with a powerful serve was very difficult for many opponents to return.

Selected the team MVP, Gary was the only high school student to make the Tuolumne County Tennis Club’s traveling team when they played in big tournaments in the valley. His hard work and dedication led him to receive the Jack Wivell Co-Most inspirational male athlete award for the class of 1970. Gary also coached tennis in the early 1970s for Argonaut High School.

For nearly three decades Kevin served as Sports Editor for the local newspaper. From 1981-2009, he covered all boys and girls sports and community sporting events, providing detailed accounts for all. Along with teams, he covered many outstanding individual athletes, providing those who kept scrapbooks with wonderful insights for recollection. He describes his experiences covering athletes and their impact on the fabric of the community as a privilege that was so much more than just a job.

Tara helped set the state for girls athletics at Sonora High. An outstanding athlete during its early years, she played tennis and basketball. In the former, she and her sophomore year doubles partner Kasey Dawson went undefeated in the VOL making the all-league team. The next year the pair again were undefeated until the Section Finals and she again made the all-league team. Tara successfully played singles her senior year and joined the all-league team once again.

In her sophomore year, Tara became a member of the first girls’ varsity basketball team that in 1975 competed in the VOL, performing as a starter that year and during her subsequent two seasons. She made all-league each year and was team MVP the last two of those. Leading the team in scoring and rebounding, the 5’11” center was considered the best defender in the Valley Oak League.

A three-sport athlete, Robert participated in baseball, football, and wrestling, excelling in the latter two. A two-way starter in football, he made first-team VOL all-league and was selected to the Lions North/South All-Star game. He went on to play two years of football at Cal Poly in San Luis Obispo.

In wrestling, Robert competed as a heavyweight, usually against bigger guys. However, more times than not always seemed to defeat his opponent and was a state tournament qualifier, placing 2nd at the Section finals.

A two-sport athlete, Patrick was selected football team captain his senior year, making the 2nd team all VOL as an offensive guard and defensive linebacker.

In wrestling, Pat was on the varsity squad for three years. In 1985, he placed 2nd in the VOL qualifying for both Sub-Section and Sections and made 2nd team All-District. In his senior year, he placed first in the VOL, first in Sub-Sections, qualified for the State Tournament and was selected to the All-District team. He went on to have a very successful collegiate wrestling career at Modesto Junior College.

An outstanding volleyball and basketball player, during her era Shauna was considered by many as one of the finest setters in volleyball. A three-year varsity starter, she was named to the Valley Oak League all-league team; Most Valuable setter in the VOL and made the all-region team her senior year. Her ability to get to the ball to set up her power hitters was truly outstanding, and she was a very consistent server who recorded many aces.

As a member of the varsity basketball team for two years her high energy, hustle, and all-around play helped the Wildcats to two very successful seasons. She received the Mary York Most Inspirational female athlete award for the class of 1991.

Zack excelled in the sports of football, wrestling, and baseball. As a senior quarterback, he set the school record for throwing 24 touchdowns. He was selected to the VOL all-league first team, the Modesto Bee all-area team and made the Lions All-Star game. A three-year varsity wrestler, Zack made Sub-Sections his junior and senior years.

In baseball, he was an all-league player both his junior and senior years, the latter in which he led the league in hitting and home runs. His 1995 team were Section Runner-ups. Zack went on to play two years of baseball at Modesto Junior College.

A two-sport athlete in football and track, John left his mark in both. A fearless defensive football player, he was one of the most exciting punt and kick-off returners in the history of Sonora football and was on the varsity team four years as he came up as a freshman for play-offs. His awards included: 1st team VOL, 1st team All-District, 1st team Stockton All-Area, and 1st medium schools All-State. John went on to play at Butte College for two years and played semi-pro/Arena Football for eight years.

Running track, John was on the varsity team for three years, posting school records in the 400 and 4 x 400 relay and making the Section finals all three years.

Ryan was a standout guard, making first-team Valley Oak League his junior and senior years, and scoring over 1,000 points over the period. He had a high of 6 three-pointers in one game against Summerville. Ryan not only could shoot but drove to the basket extremely well and was an outstanding defensive player. As a sophomore, he averaged 20 points a game.

Ryan went on to play two years at MJC making the Honorable Mention All-CVC team. He then played one year at Stanislaus State before an injury ended his career.

Among her honors, Meghan made Academic Block “S” recognition for three years, was selected the Scholar-Athlete for the class of 1998 and was the Rally Commissioner her senior year.

Andrew had outstanding success on the football field and the wrestling mat. A two-time VOL all-league defensive linemen, in 2004 and 2005 he was selected the MVP Defensive Lineman of the Year. He was 1st team All-Section and received a full scholarship to Sacramento State University.

Kelli, who played three sports, was one of the finest all-around athletes to star at Sonora High School. In volleyball during her senior year she made 1st team VOL All-League, All-District, All-Area and was Defensive Player of the Year. She also was Max Preps 2nd team All-State. She played four years on the varsity basketball team. Among her honors was VOL 2nd team her sophomore year and an All-District Honorable Mention. In her junior year, she made it to VOL 1st team, 2nd team All-District. As a senior, she achieved 1st team VOL, 1st team All-District, Six-County All-Star team.

In softball, Kelli made All-Area 1st team and Co-MVP along with VOL 1st team, All-District Large School. The Modesto Bee selected her as its “Athlete of Year-Best of the Best” in 2011 and received the Elks Award as the Outstanding Female athlete for her class. She then went on to have a very successful collegiate career playing softball for Chico State.

Officials say tickets to attend the Oct. 5 banquet are $40/person; $20/children 12 and under. The event begins at 5 p.m. with a no-host bar, followed by the dinner and awards respectively at 6 and 7 o’clock. Reservations are due with checks made out to Sonora High School Foundation by Sept. 20. These should be mailed to the Hall of Fame Committee, 18440 Lambert Lake Rd., Sonora CA 95370. For questions or reservations, call Rick Francis at 209 533-0364 or email rickfrancis48@gmail.com.