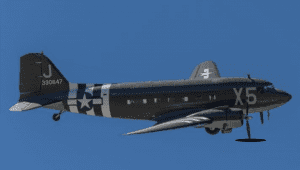 Columbia, CA – If you spotted an overhead plane that looked like a World War II replica, it was the real thing.

According to flight instructor Chris Miller of Columbia Airport-based Springfield Flying Service, the father-son team who flew a historic aircraft called the C-47 Virginia Ann, flew in Tuesday for some time with him and his Stearman trainer biplane and will stay another day.

The pair, Barry and Coleman Fait are recently returned from piloting the Virginia Ann among a special D-Day squadron of restored C-47 WWII American military aircraft called The Mighty Fifteen. They joined a larger contingent to commemorate the 75th anniversary of D-Day by taking part in a historic Daks Over Normandy flyover that involved more than 30 international planes.

Flying what is known as a Blue Spruce Route over the North Atlantic with ground-based navigational aids, the aircraft made fuel stops at sites that were active WWII airfields. Crossing the English Channel, the planes dropped over the shores of Normandy some 250 paratroopers in authentic Allied uniforms with WWII military-style parachutes.

Described as the largest such assembly since Operation D-Day itself on June 6, 1944, it was meant to honor the citizen-soldiers who risked life and limb to bring about the beginning of the end of the war in Europe. The overall schedule additionally included public displays and community events in the United Kingdom and France.

In every WWII theatre, C-47 aircraft transported manpower and materials. They were based on DC-3 airliners, whose design, newly in commercial airline use first made transcontinental and worldwide air travel possible.

The Virginia Ann was built by Douglas Aircraft in Long Beach. Delivered to the US Army Air Force Sept. 21, 1943, and transferred to the 59th Squadron of the 61st Troop Carrier Group. On D-Day, she carried some of the 2nd Battalion, 507th Parachute Infantry Regiment of the 82nd Airborne and in the following days was involved in resupply and injured evacuation operations.

She went on to participate in Operations Market Garden and Varsity and after WWII, served as a civilian sector transport. Since 2016 Mission Boston D-Day LLC of Newport Beach has owned the plane, which is currently painted in her original D-Day livery.

Miller shares an interesting local note, adding that Shane Wallace, a former local and Sonora High graduate, is part of the Paso Robles-based team that piloted another of The Mighty Fifteen C-47s, Betsy’s Biscuit Bomber, in the Daks Over Normandy flyover.