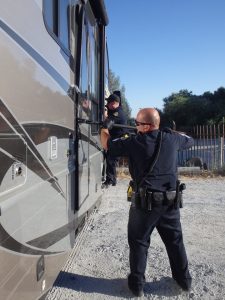 Sonora, CA – A Jamestown man is on a $100,000 bond after being handcuffed for DUI, hit-and-run and resisting arrest.

A call came into Sonora Police Dispatch around 6:15 p.m. on Thursday reporting a hit-and-run in the parking lot of the Crossroads Shopping Center on Sanguinetti Road in Sonora. Chief Turu VanderWiel details, “The caller reported that a large RV had struck his vehicle twice, left the area, struck a street sign, and fled the scene driving over a sidewalk.”

Officers caught up with the driver, 62-year-old Timothy Brown, after he pulled over in the 1100 block of Mono Way near Gus’s Steakhouse. Chief VanderWiel says officers knocked on the RV door and called on Brown to come out of the vehicle. He relays, “He was just refusing to come out. We didn’t know if he was barricading himself in or what. But anytime we can’t see what’s going on and we know somebodies in there, we kind of got to act quickly before they formulate a plan to assault us as we come through.”

Eventually officers were able to force their way into the RV and although Brown struggled with officers they were able to remove and handcuff him, according to Chief VanderWiel. Brown was arrested for DUI, Hit and Run, obstructing a police officer, driving on a suspended license and a violation of probation. The latter is related to a similar incident that took place over two years ago in Jamestown where Brown was involved in another hit-and-run, as reported here.