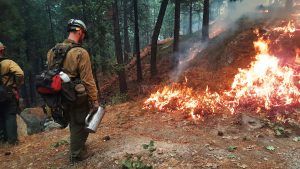 During a tour of a wildfire prevention project near Colfax today, Newsom gave a jab to President Donald Trump, who has repeatedly criticized the state’s Democratic leaders for not managing the forest properly. The project is about 30% complete and it is adjacent to federal land. Newsom took the opportunity to point out “there’s nothing happening on the other side of that line.” He added, “We [the state] need a more robust commitment from the federal government.”

Newsom touted that 33 of 35 forest-thinning projects are on pace for completion by year’s end after he says the state eased environmental laws. The projects are designed to slow the spread of wildfires near more than 200 communities in fire-prone areas. Records show many of them are getting a slow start, to which Newsom commented, “It’s not perfect but we are making progress.”

The governor also announced that this year the state will hire nearly 400 additional seasonal firefighters. Most will be used to add a fourth crew member on CAL Fire engines, while two-dozen will supervise firefighting crews made up of members of the California National Guard.

Newsom acknowledged that there has been good cooperation with federal agencies when it comes to disasters and violence like Sunday’s mass shooting at Northern California’s Gilroy Garlic Festival.  He shared that in the last ten days he has talked to President Trump twice, but would not reveal exactly what they discussed. The White House did not respond to Newsom’s criticism, but confirmed the two had spoken twice.