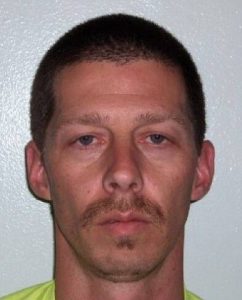 According to Chief Mark Stinson his department was alerted Tuesday by the Victim Witness Program in the District Attorney’s Office that the victim of a violent crime was in their custody.

The unidentified female stated that over a two day period she had been repeatedly beaten by Dellinger and held against her will. She added that Dellinger had threatened to kill her with a weapon he had. He had also disabled the phones. The victim was finally able to escape.

A BOLO (Be On The Lookout) was issued for Dellinger and it was Wednesday evening that an officer spotted Dellinger riding a bicycle on School St. He was taken into custody without incident and booked into the County Jail.

Dellinger has been charged with felony false imprisonment with the use of violence, felony inflicting corporal injury, felony assault with a deadly weapon, felony threat to commit a violent crime/act and felony obstruction of a phone line.