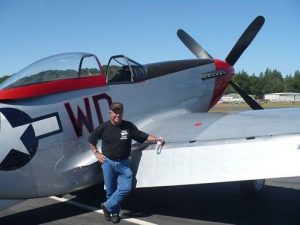 Columbia, CA — Hollister’s Dan Martin is a regular visitor to the Father’s Day Fly-In.  He doesn’t drive to the Columbia Airport … he flies his World War II P-51 Mustang fighter plane into town.  Only takes him about 20 minutes from San Benito County.

Martin’s P-51 is one of two appearing at the Fly-In this weekend. It’s called the Ridgerunner.

It was in 1974 that Martin was commissioned to fly to Central America to fly an El Salvador Air Force plane back to the U.S. for the buyer. Martin noticed a badly damaged P-51 in the weeds and bought it for approximatley $20,000. He then invested between $60-80,000 to get the plane airborne three years later.

No doubt the Ridgerunner has a colorful history. It flew during World War II. It then joined the Swedish Air Force but was decommissioned when the Swedes went to jet aircrafts.

The plane found its way to a Georgia owner who sold it to El Salvador interests. It was then used in the 1969 El Salvador-Nicaragua Soccer War over a disputed soccer match.

Martin adds that it’s a costly venture. Despite the fact that he takes care of all the maintenance he says with insurance for the full value of the plane it costs him approximately $2,500 for every hour in the sky.

At the same time he admits, “It’s an airplane that won’t go away. It was a beauty of an airplane when they built it and it’s like the Seven Wonders of the World … it’s the Eighth Wonder of the World.”