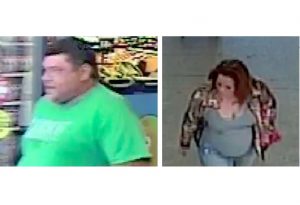 Sonora, CA – Take a look at the photos in the image box and if you recognize either of these individuals you are asked to contact the Sonora Police Department as they are wanted for going on a shopping spree around Sonora using another person’s credit card.

Investigators received a call from a local resident reporting that they had left their credit card while shopping on Sunday July 7th and worried it had been pickup and used. That fear became a reality when detectives confirmed the card had been used since then at several stores. One of those was the Walmart at the Crossroads Shopping Center on Sanguinetti Road in Sonora.

Police did not have a list of all the businesses targeted by the couple nor an amount that had been charged. Anyone who may know the pair or have information regarding the case is asked to contact the Sonora Police Department at 209-532-8141.