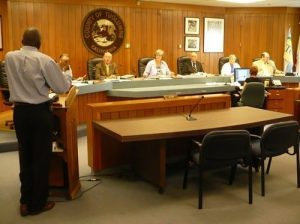 Sonora, CA — The Deputy Sheriff’s Association (D.S.A.) of the Tuolumne County Sheriff’s Office has relinquished $1.1 million to the county in salary and benefits given the current $7.2 million budget deficit.

According to D.S.A. President Ken Diaz the deputies are relinquishing holiday pay and cafeteria pay (health insurance). Deputies will not be allowed to cash out their vacation pay and they have delayed until July, 2010 a negotiated three percent pay raise.

In return the D.S.A. will be allowed to extend its contract to 2010. In addition the D.S.A. is hopeful the county will allow the union to fill two positions that are now vacant. Diaz adds that a third position may also need to be filled.

Diaz says the D.S.A. vote was overwhelmingly in favor of relinquishing the $1.1 million to the county.