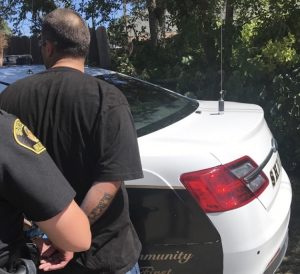 An investigation determined that 33-year-old Dustin Walker of Valley Springs reportedly used a firearm to steal a cell phone and the keys of an acquaintance’s Mercedes. The second suspect, 33-year-old Angela Lindlow of Valley Springs allegedly participated in luring the victim to the location where he was robbed.

About a half hour later, sheriff’s officials located the stolen Mercedes in front of a mobile home park on Sequioa Avenue. Walker was soon spotted walking in the area and placed under arrest. Lindlow was later found at a nearby residence, and also taken into custody.

The sheriff’s office reports that they face charges of Robbery, Vehicle Theft, False Imprisonment, Criminal Threats, and Conspiracy to Commit a Crime. The crime occurred Friday at 9am.