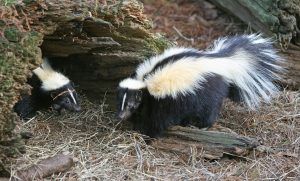 According to Tuolumne County Animal Control, last week a skunk tested positive for the rabies virus immediately following an incident in Groveland involving contact with a human.

Officials stress that if any wild animal allows a person to make physical contact, it is generally a sign that something is seriously wrong with it. Rabies exposure does not require a bite in order to transmit from a mammal to a human; contact from saliva through an open wound is enough to become infected. So, instead of attempting to assist any wildlife acting strange or ill, reach out to local animal control personnel, who know the protocol and have proper handling equipment and procedures.

As Tuolumne County Animal Control spokesperson Christina Whitcomb explains, animals frequently lick to clean themselves and may drool, which makes it possible for a human to come in contact with their saliva, sometimes unknowingly. “If that animal is rabid and you are picking up the animal and touching it, we would definitely consider that an exposure and forward that to the Health Department for you to undergo rabies treatment,” she warns.

According to the Centers for Disease Control and Prevention (CDC), the vast majority of reported rabies cases occur in wild animals like raccoons, skunks, bats, and foxes, which are carriers of the virus. However, once transmitted, another mammal can pass the virus on. The rabies virus infects the central nervous system, ultimately causing disease in the brain and death.

Early symptoms of rabies in people are similar to that of many other illnesses, including fever, headache, and general weakness or discomfort. It is important to note that medical intervention is critical following contact with a wild mammal that tests positive for rabies.