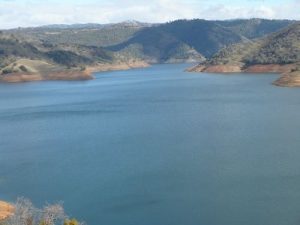 Sonora, CA — Decisions at the federal level will have a significant effect on New Melones Reservoir.

A Biological Opinion has been handed down that will result in New Melones being near empty, approximately 18 percent of the year. The mandate was made by the by the National Oceanic Atmospheric Administration’s (NOAA) Fisheries Service and National Marine Fisheries Service (NMFS).

Tuolumne County Supervisor Dick Pland brought the matter to the attention of the Board of Supervisors Tuesday. “They’re (NOAA and NMFS) doing this because under their biological opinion, they need all that water to help with the Delta issues,” stated Pland. “This is a huge issue that I think not many people really know about.”

“This is draconian,” added Pland.

The federal government is also trying to protect the Central Valley steelhead, a fish, from the operations of New Melones Reservoir.

During portions of the year, New Melones Reservoir will be drained down below 500 TAF (thousand acre ft.), including parts of the summer months, and cooling water will be brought down to flood the lower Stanislaus River.

Pland noted that the decision will have a significant effect on recreation, water supply for Central Valley farmers and power generation.