Abandoned Mine Discovered At Calaveras Park 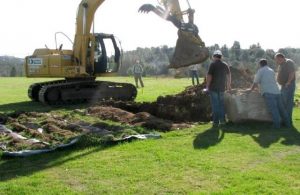 The ground of the baseball diamond began to sink as children played on the field.  Park caretakers were notified and it was soon discovered that a 7 foot by 6 foot hole covered by a large boulder had opened up. The hole is thought to be a mine shaft 200 feet deep with a false bottom 14 feet down.

Chernow was at today’s plugging of the mine event along with Office of Mine Reclamation /Abandoned Mine Lands Unit Manger Steve Jenkins to discuss the threat to public safety posed by abandoned mines. Calaveras County Supervisor Gary Tofanelli was also on hand to discuss the incident.

Chernow said there are other deep mine shafts in the area and urges anyone who thinks they may have discovered an abandoned mine to call the Office of Mine Reclamation/Abadoned Mine Lands Unit 1-877-OLDMINE.