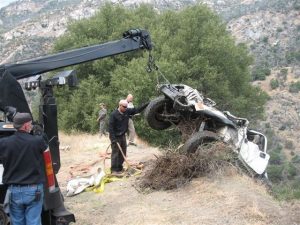 Tuolumne, CA — A Fresno man suffered only moderate injuries after his Jeep rolled approximately 600 ft. down an embankment Sunday morning in Tuolumne County.

The CHP reports that 54-year-old Thomas Cooke was driving on Cherry Lake Road near Mather Road when he entered a sharp hairpin curve and drove off the roadway edge. The CHP says that the tracks were located by a passerby, Rodger Tidball, at 7:10am, approximately two hours after the accident.

Tidball started climbing down the canyon and noticed Cooke’s vehicle. Tidball then called 911 and rendered aid to Cooke until the ambulance arrived. Cooke was eventually flown out of the canyon by a CHP Helicopter and taken to Doctors Medical Center.