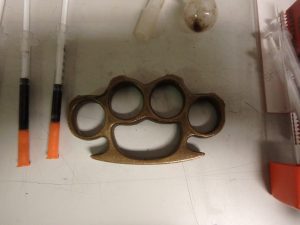 Sonora, CA – While patrolling behind closed businesses at a Sonora shopping center, a police officer saw a truck with its dome light on and decided to investigate.

It was behind the PetSmart store in the Crossroads Shopping Center along Sanguinetti Road at around 11:30 p.m. on Thursday when the Sonora Police Officer spotted the light illuminating from a parked 2001 Dodge Ram pickup. The officer confronted the driver, 39-year-old Michael Wayne Bryant III of Nashua, New Hampshire, and began questioning him as to why he was stopped there.

Sonora Police Chief Turu VanderWiel says that is when things got interesting, sharing, “Bryant stepped out of the vehicle and a syringe fell from his lap. The officer detained Mr. Bryant and searched him and his truck, locating more than 20 syringes, heroin and a set of metal knuckles along with some methamphetamine pipes.”

Bryant was taken into custody without incident. He faces felony charges for having the brass knuckles and several misdemeanor related drug charges. His bail was set at $20,000.