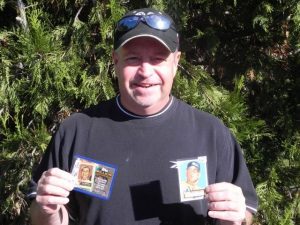 Sonora, CA — A Tuolumne County man has won what many consider the “crown jewel” of sports cards.

The Topps trading card company is running a promotion entitled “The Cards Your Mother Threw Out,” with the most coveted card being a 1952 Mickey Mantle. Industry magazine Beckett lists the cards value up to $30,000, depending on its condition.

The winner of the Mantle card is Mark Davis, a restaurant manager at Diamondback Grill in Sonora.

The promotion is through the 2010 Topps series. One out of every six packs of cards has a promotional card with a code. Collectors then go to a website and type in the numbers to find out what card they have won.

Davis purchased a box of cards that included the pack at B.J.’s Cards and Collectibles in downtown Sonora.

“Obviously I was completely shocked and wasn’t sure it was for real,” says Davis. “Anybody that collects cards knows that the 1952 Mantle card is kind of the holy grail of all modern baseball cards, so I was very excited.”

Davis has been in contact with marketing officials for Topps and they are working out the details about turning over the card to his possession. Davis does not know what type of condition the card will be in, which is critical to its value. The New York Times reports that a mint condition 1952 Mantle card sold at auction in 2001 for $275,000.

Davis, who has collected baseball cards off and on for many years, says he hasn’t decided what he will do with the card.

He adds, “If it is extremely valuable, it would be difficult not to sell it, but on the other hand as a true collector, I’ve never really sold cards before, and it sure would be nice to have it in the collection.”