Praised For Saving A Life 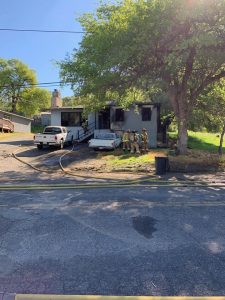 Tuolumne City, CA – Two Tuolumne Fire District Firefighters were recognized this week for their heroic actions during a house fire that saved a man’s life.

At the fire district’s station on Main Street in Tuolumne Wednesday night during a meeting, those firefighters, 20 year-old Andrew “Riley” Derichsweiler, who has been with the department for a year and a half and 25-year-old Cameron Medeiros, going on 5 years, where awarded plaques praising them for their heroism on that cold spring day.

Called out to a house fire on April 25th, they arrived to find flames ripping through a home in the 18000 block of Apple Colony Road near Maple Avenue at around 9 a.m.  As the pair was heading into the house, three residents that had escaped the blaze relayed a man was still inside.  Chief Nick Ohler details, “Smoke was almost banked down to the floor, so the guys recognized that they had a limited amount of time. For chance of survival they needed to get him out quick.”  He continued, “They could hear someone yelling and they were able to locate him and successfully get him out of the building.”

The victim, Melvin Slate, had to be flown to Sacramento’s U.C. Davis Medical Center to be treated for burns and smoke inhalation. Additionally, as the fire raged, Summerville Elementary School across the street was forced to go on lockdown until the blaze was knocked down. Chief Ohler points falling asleep while smoking a cigarette as the cause of the fire.

Slate was not at the award ceremony, but Chief Ohler was quick to praise Derichsweiler and Medeiros, stating, “It’s not every day and for some folks this is a once in a career opportunity to actually save someone’s life in this scenario – I couldn’t be more proud.”