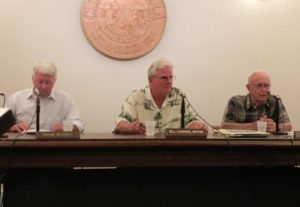 Sonora, CA – The City of Sonora will not take part in a regional effort to secure funding designed to help plan for sustainable growth, out of fear that it would create too much additional government bureaucracy.

Community Development Director Bev Shane spoke to the Council Monday about a proposed “Central Sierra Regional Action Plan for Prosperity.” Participants could potentially be eligible to receive state funding for improvements designed to create healthy and sustainable communities, and reduce greenhouse gas emissions, as required under AB 32. The philosophy is often referred to as “Smart Growth” by state leaders who support the idea.

All five council members voted against taking part in the regional effort, as most cited that they are personally opposed to AB 32 and its potential effects on businesses. Councilmember Dave Sheppard was the most vocal, stating that man made global warming is “a myth.” There was discussion about how the regional effort would potentially create more bureaucracy for the City. The five also expressed overall dissatisfaction with the state in general and increasing regulations placed on residents.

The Counties of Tuolumne, Calaveras and Amador have been discussing whether to submit a joint application to create a Livable Communities Plan, to improve the chances of being selected for state funding.