‘Showers Of Blessing’ Gears Up For Summer Season 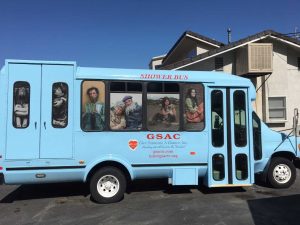 Sonora, CA — The non-profit group Give Someone a Chance has helped to deliver close to 1,000 showers to members of the homeless community over the past year.

The bus was only operational two days a week during the winter, but the group reports that it is now transitioning to four days a week. One of the lead organizers, Hazel Mitchell, has named it “Showers of Blessing.”

On the first Tuesday of every month, it will be set up at the David Lambert Drop in Center on Jackson Street and the second, third and fourth Tuesdays at the United Methodist Church in Tuolumne. Every Wednesday, it will be at the former Adventist Hospital on Forest Road in Sonora, Thursdays at the Jamestown Hope Center and Fridays at the Red Church in Sonora. The hours each day will be 10am-1pm, and the showers are first come-first-served.

Mitchell adds, “All in all, it is to make them feel better. But it is also so that they can present themselves in a way that they can get jobs, and walk around with dignity and pride.”

She emphasizes that the end goal is to help create a path that leads people out of homelessness.

Give Someone a Chance provides the shower users with things like towels, undergarments and toiletries, while the organization Nancy’s Hope helps with food and clothing.

Give Someone A Chance is also rolling out a program called, “Trash to Cash.” Thanks to a donation from Lowe’s, homeless residents are given large trash bags to big up garbage. Each time they return one full, they receive a token. A single token will allow the residents to purchase something like batteries, 24 tokens will get them a fold up cart and 50 tokens can land them a bicycle. Speaking about the foldable carts, Mitchell says the hope is that it will lead to fewer people taking shopping carts from local businesses.

One of the areas that the group is hoping trash will be collected from is a homeless camp spread along seven acres off Stockton Road where the owners of the property are allowing them to stay. Mitchell notes that later this week managers with the local Walmart will be out doing some volunteer weed-whacking at the site to make it more fire safe ahead of the hot summer months. Walmart has also committed to awarding Give Someone a Chance a $100 gift card each month to purchase supplies, in addition to a $5,000 donation.