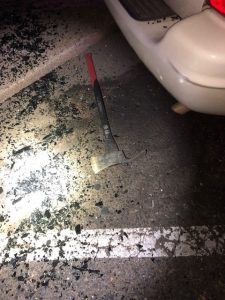 Sonora, CA – A man mad that his SUV had broken down caused a scene with a nearby resident and even smashed a window in the vehicle with an ax before being arrested.

A concerned resident called police just after 10 p.m. on Thursday and reported a man causing a disturbance in the 45th block of South Shepherd Street in Sonora. Once on the scene, an officer saw 37-year-old David Sean Johnson of Columbia walk behind an SUV with an ax in hand. The officer then heard a loud bang and the crackling of shattered glass hitting the ground prompting the arrest of Johnson.

Sonora Police Chief Turu VanderWiel details what sparked the incident involving the two strangers, stating, “The suspect parked and started working on his vehicle. He was yelling and started hitting his vehicle and that caused the resident to kind of look into things and essentially he asked him to leave.”

That enraged Johnson who then tore off his shirt while challenging the resident to a fight. A records check revealed that Johnson was on probation for felony battery, allowing for a search. Inside Johnson’s pocket, the officer discovered a Colt .45 bullet and he detected the strong odor of alcohol. Both are violations of Johnson’s probation.

Johnson faces charges of felony violation of probation, felon in possession of ammunition, and public intoxication.