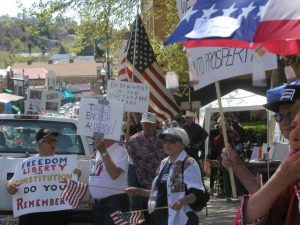 "We have folks out here who want some better policies, and better candidates for office," says Max Kernaghan, one of the organizers. "There’s a lot at stake right now because some political factions want to get rid of our constitutional protections and freedoms."

The Tea Party was non-partisan, but many of the signs and chants were geared at President Obama, House Speaker Nancy Pelosi and Senator Barbara Boxer.

A similar event was held Thursday evening in Angels Camp.