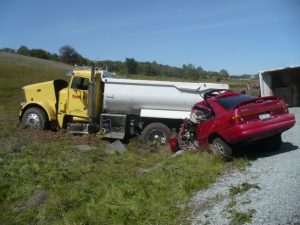 Jamestown, CA — The C.H.P. has identified the deceased in that Friday afternoon accident that claimed the life of an 88 year old LaGrange resident.

The two vehicles ended up in a ditch on the north side of the highway. Due to the gravel spill from the second trailer westbound traffic was slowed for several hours.

32 year old James Eckroy was the driver of the Rock-It Trucking Company vehicle. He suffered pain in his right thigh.

This marks the second traffic related fatality of the year in Tuolumne County.