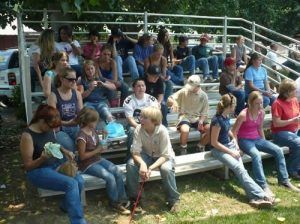 Sonora, CA — For the second consecutive year there has been a change in the dates for the Mother Lode Fair.

Last year the dates were changed to June to avoid the summer heat but Mother Nature surprised everyone with a blast of heat that severely curtailed attendance.

So now the Fair is moving its dates to July. The dates this year; the 9th, 10th and 11th at the Mother Lode Fairgrounds.

As Fair Manager Jan Haydn-Myer stated, “We can’t run from the sun.” At the same time she added, “We’re excited about the new dates because we’ll be able to bring in a quality carnival. In addition we are lowering our prices because of the economic downturn. We’re also excited about our annual involvement with 4-H and Future Farmers of America.

Our theme this year is Catchin’ Big Fun and we’re hoping to have some fishing exhibits. In addition our exhibitor handbooks should be on-line in the next two weeks.”