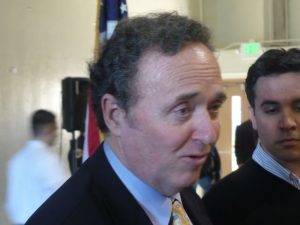 Angels Camp, CA — Congressman Dan Lungren spoke out on a number of subjects during his Saturday Town Hall meeting at Frogtown.

On the direction of the Obama Administration toward bigger government, “I don’t think most American voted for us to move in the direction of the European Democratic Socialist model. That is one in which government dominates almost all activity. Most of the answers to problems are government. As you could tell today with my constituents (Calaveras County) that is not how they feel.”

On President Obama’s refusal to scrap the two proposed health care reform bills, “That’s a fatal flaw in his analysis now. The latest Rasmussen Poll that I’ve seen (1,000 polled over a 48 hour period) shows that 61 percent want to scrap both versions and start all over again. That’s a pretty strong sentiment.”

On job creation, “Let’s allow that dynamic part of the economy, the private sector particularly the small and medium size businesses … let’s give them a chance. How do you give them a chance? You keep money in their pocket. I would suggest that you suspend the payroll tax for a half a year or a full year. Have a across the board cuts. Make sure the Bush tax cuts do not out of effect.”

On China being the number one banker for the U.S., “They are the largest banker in the United States now. They own more foreign debt than any other foreign country and there are consequences for that.”