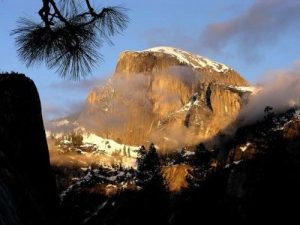 Sonora, CA — Last year at this time the Sierra Nevada snowpack was around 198 percent of average for the date, but this year it’s about 30 percent.

Dan Rizzardo with the California Department of Water Resources says the Northern Sierra is 35 percent of average, the Central is 20 percent (includes Tuolumne and Calaveras Counties) and the Southern is 35 percent.

Rizzardo says this year’s numbers are very comparable to 1990, which was the driest December on record in the state. A wet January, February and March that year resulted in a 72 percent of average snowpack when all was said and done.

“Looking out past the first of the year, the forecast appears to be a wetter scenario, so maybe we’ll get things turned around,” says Rizzardo. “One thing we have going for us is that last year was a very wet year, and there’s a lot of carryover in our reservoirs.”

“But it does bear some concern because the snow machine really hasn’t turned on yet, and as it gets later in the year, it is going to be harder to make up,” he adds.

The lack of snow has made it difficult for many ski resorts. Dodge Ridge and Badger Pass still remain closed.