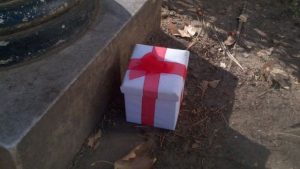 Sonora, CA — Courthouse Park in Sonora was closed for approximately 45 minutes this morning when a box with a red ribbon was found sitting next to a light pole.

The Police Department was notified, and as a precaution, officers asked those in the park to move away from the area. Cones were then placed along the side streets to block access, and a neighboring county’s bomb squad was dispatched to assist.

Police Chief Mark Stinson then learned that the County’s Facilities Management Department was putting on a treasure hunt today, and someone had purposefully left the box in the park. Stinson says thankfully everything turned out to be a false alarm. He notes that officials always have to use precaution when suspicious items like this are located.

Updated at 4:45pm: Facilities Management Supervisor Ken Watts says he is sorry for the confusion this morning. He adds that the treasure hunt is something that he has done for his workers over the past 10 years around Christmas. Watts says it was entirely his doing and not the county’s. He says he’ll come up with a new system next year, so that this will not happen again. He says he is sorry for the extra work it caused the Police Department and everyone else involved.