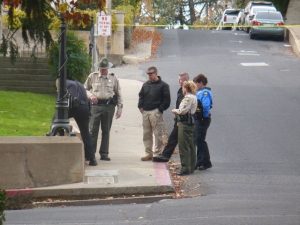 Sonora, CA — The Tuolumne County Courthouse was evacuated this morning when a fake bomb was found near the Yaney Avenue Entrance.

The suspicious item was located shortly after 9am. Police Chief Mark Stinson says three cylinder type items were taped together, and they were connected by wire to a black box. The Calaveras County Bomb Squad was called in to investigate, and determined that the item was inert.

The bomb-like device was found in a canvas bag. The Police Department believes that it was dropped off at the Courthouse sometime between 7-9am. Courthouse surveillance tapes will be reviewed as part of the investigation. Anyone with information is encouraged to contact the Sonora PD at 532-8141.