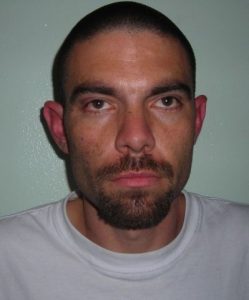 A Stockton man was arrested after Sonora Police officers noticed him hiding behind a soda machine near downtown Sonora. It was at 3:52am in front of O’Relly’s Auto Parts on S. Washington Street.

Police Chief Mark Stinson says 30-year-old Eric Allen Wright was acting suspicious, and when the officers wanted to search him, he took off running. During a foot chase, Stinson says Wright tossed an 18 inch screwdriver and a hypodermic needle. When officers finally caught up with Wright, he was trying to toss a large sum of one dollar bills.

The officers later found that the soda machine had been broken into, as had two others located near downtown Sonora. Wright was found to have 153 one dollar bills, and around his neck was a used methamphetamine pipe.