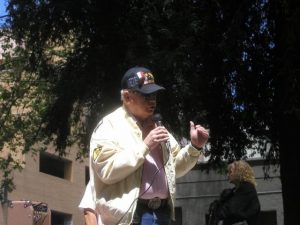 The month of October Is Agent Orange Recognition month.

Agent Orange is the name of a specific blend of herbicides used during the Vietnam era. The military sprayed millions of gallons on trees and vegetation that provided cover for enemy forces.

Some Vietnam-era Veterans were exposed to these herbicides. VA and many other government departments and agencies have conducted research studies on the possible health effects of Agent Orange exposure on U.S. Veterans.

VA has recognized certain cancers and other diseases related to Agent Orange exposure.

Veterans, Veterans’ children and survivors may be eligible for compensation benefits for these diseases and health care benefits.

Veterans who are eligible for the Agent Orange Registry health exam at the VA clinic:

■Veterans who served in Vietnam between 1962 and 1975, regardless of length of time.

■U.S. Army Veterans who provided perimeter security on RTAF bases in Thailand anytime between February 28, 1961 and May 7, 1975.

■U.S. Army Veterans who were stationed on some small Army installations in Thailand anytime between February 28, 1961 and May 7, 1975. However, the Amy Veteran must have been a member of a military police (MP) unit or was assigned a military occupational specialty whose duty placed him or her at or near the base perimeter.

■Veterans who may have been exposed to herbicides during a military operation or as a result of testing, transporting, or spraying herbicides for military purposes.

Veterans throughout the area will be handing out “Orange Clovers” at various locations on Friday to bring awareness and attention to the issue of Agent Orange.

Smart encourages local veterans to call the VA Clinic (209) 588-2601 for more information on health issues or click on http://www.va.gov