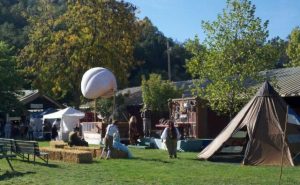 Sonora, CA– All Hallows Fantasy Faire was a popular pre-Halloween costume event held over the weekend at the Mother Lode Fairgrounds.

According to the volunteer staff, approximately 1,300 people of all ages attended on Saturday and 2,000 over the two days. Many vendors said they earned enough on the first day so that the second day’s sales were all profit. The fair was organized by the same crew that ogranizes the annual Celtic Faire. The event was headed by Patrick Karnahan, and Lissa Britt coordinated volunteers both young and old. The 13 Chambers of Horror, which many faire goers described as “disturbing”, was organized by Erik Saakar and Jennifer Hatler-Abila. There were also magic acts, plenty of belly dancers, music and fire dancing.

Over 150 entered the costume contest. In the sci-fi category the father and son Tron inspired costume won in addition to a fortune teller, steampunk man with a robotic arm, little red riding hood and wolf, and an umpaloompa. (see photos)

Other popular Halloween events in the Mother Lode include the Hi 4H Haunted house and the Harvest trains at Railtown 1897. For upcoming event information visit the event calendar.