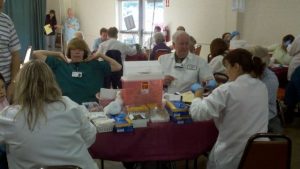 Officials report that the 33rd annual Tuolumne County Health Fair was a success.

“It was a wonderful year,” says Nurse RN Kathy Amos, one of the organizers. “The only glitch was that we ran out of parking spaces.”

Amos notes that some visitors were forced to park in the barns and upper parking lot at the Mother Lode Fairgrounds. Amos notes that the overall numbers have not been calculated, but workers report that attendance appeared to be up from last year.

It is unknown what led to that decline. Amos says she hopes it was not due to the inability to pay the $20 fee. She notes that scholarships were available and given out to many that did not have the financial resources to cover the cost.