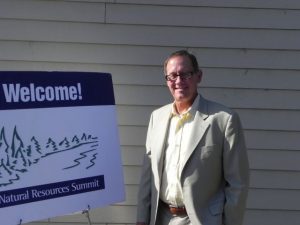 The event was held Friday morning at the Mother Lode Fairgrounds.

“Here in Tuolumne County, we are where water originates,” says Olsen. “Water issues in California are so complex, and there’s a lot we need to do to make sure that we have a safe and reliable water supply for all of California’s needs, but also one that restores our historic water rights.”

Republican Congressman Jeff Denham spoke briefly about the Secure Rural Schools and Community Self Determination Act. The legislation was first approved in 2000 and provides payments to rural counties for schools and roads. It is designed to make up for a loss of timber production revenue. Denham says today, September 30, is significant.

“Today is the day when rural school funding ends,” says Denham. “We need to pass something right now. It could either be a new bill that will extend spending for the next several years, or something that ties it to timber receipts. We’ll be going back and working on this in the Natural Resources Committee.”

Even though the Secure Rural Schools legislation officially expires today, schools and counties will receive final payments in December or January. Tuolumne County has received up to $2.5 million a year from the legislation.

Most in attendance were timber industry proponents. In an interview after the event, Republican Senator Tom Berryhill said, “We should be cutting more trees down, so that we can have affordable housing. Unfortunately in Sacramento, instead of talking about timber, water and things that can move California forward, we’re talking about the budget, which is a complete mess.”

This was the 11th year of the event. It was attended by numerous government leaders from the City of Sonora and Tuolumne County.