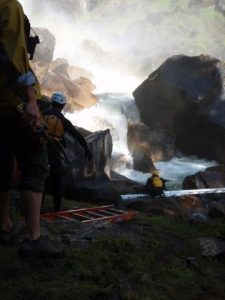 According to Park officials, David was found in the Merced River, approximately 240 feet from the base of Vernal Fall by Yosemite Rangers and Search and Rescue (SAR) personnel at around 1:00 p.m. yesterday.

Recovery operations took approximately four and one half hours to complete and required technical rigging and swift water trained personnel.

David has been missing since July 19th, when he, 27-year-old Ninos Yacoub of Turlock, and 21-year-old Manteca resident Ramina Badal, were seen being swept over the 317 foot waterfall. The area where the three were swept away is signed as a dangerous area, and the group had crossed a metal guardrail placed there to keep visitors away from the fast moving water.

River water levels in Yosemite continue to remain higher and colder than usual for this time of year. Visitors are urged to exercise extreme caution when in and around waterway in the park.

Yosemite National Park Rangers and SAR personnel are continuing recovery efforts in the Merced River, below Vernal Fall, for any signs of Yacoub and Badal. The Mist Trail, leading to the top of Vernal Fall, will intermittently and temporarily be closed until recovery operations of Yacoub and Badal are completed. The trail remains closed until approximately noon today.