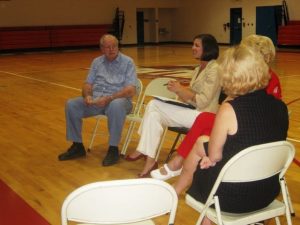 While just 15 people attended the gathering at the Mark Twain Elementary School gymnasium, Olsen says she was still very pleased with the response and participation from her constituents.

“Whether it’s 10 people or 1000 people, everybody matters,” said Olsen. “The opportunity I had just to hear their concerns, particularly about the new fee that’s being imposed in rural areas for fire service that many of us are very upset about. It was good for me to hear first hand from the people who are going to have to pay that fee unless we eliminate that bill.”

Olsen says she’s hopeful that the fire tax can be repealed. “I believe it will go to court and I do not think it’s going to withstand legal challenge because I don’t think that they can legally pass that bill without the two-thirds support in the legislature. We’re going to fight it tooth and nail because I do think it was a gross violation of the process.”

Other questions discussed Tuesday were those related to the state budget, education funding, how to keep jobs in California, how to eliminate inappropriate government spending and how Olsen’s experience has been so far in the state Assembly.

She says she was a little surprised that questions about state parks and county fairs did not come up, since they have been common concerns in other town hall meetings in her district.

“Many parks including Railtown have been on the closure list and I’m working hard with the local governments and the non-profits and the Department of Parks, to find a way to keep those open because they have tremendous economic benefit for the local communities.”

Olsen says she will remain in the Mother Lode for the rest of the week. Wednesday she’ll attend a Tuolumne Business Council luncheon in Sonora, as well as speak at a Sonora Kiwanis meeting on Friday.

Assemblymember Olsen represents the 25th District in the California Legislature, which includes Calaveras and Tuolumne Counties.