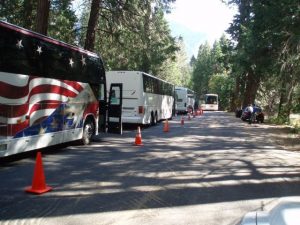 
Park officials say this inspection was done in support of “Operation Road Check” and organized as a multi-agency task force with the CHP, the San Francisco Police Department, the Federal Motor Carrier Safety Administration and the California Public Utility Commission. A total of 56 buses were inspected in the park on June 8th and 9th.

The inspections involved mechanical and safety inspections, checks of driver’s qualifications, and checking of the company’s authority to transport passengers. Of the 56 vehicles inspected, 23 vehicles were released with no violations. Another 28 vehicles were issued minor violation notices for repairs. In addition, a total of 24 violation notices were issued to companies and bus-drivers.

“Operation Road Check” is a national program that is considered to be the largest targeted enforcement program on commercial vehicles in the world. As part of the program, approximately 14 trucks or buses are inspected, on average, every minute from Canada to Mexico during a 72-hour period in early June.