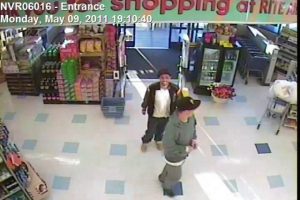 Sonora, CA — The Sonora Police Department has released the name of one of the suspects they believe attacked another man in the Rite Aid Parking Lot last month.

A man was viciously attacked at around 7:20pm on May 9. An arrest warrant has been issued for 23-year-old Conor Matthew Brown, and anyone with information on his whereabouts should contact the Sonora PD at 532-8141. Brown allegedly carried out the attack with another man. A photo of the two was captured by the in store surveillance camera.

Only one witness has come forward with information about the attack. It is unknown what provoked the attack. To read the earlier article about the incident, click here.