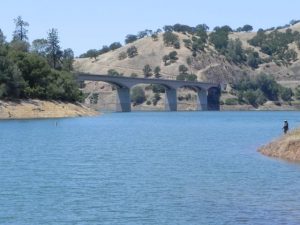 Sonora, CA — Water from the winter snowpack is starting to fill up the reservoirs across the Mother Lode.

DWR Water Supply Forecaster Steve Nemeth projects that the Stanislaus and Tuolumne Rivers will reach their peak flows on around June 18th. The Merced River should reach its peak on June 17th. Despite temperatures on the rise, Nemeth does not expect there to be any flooding around the reservoirs. “The reservoirs, from my impression, are in good shape,” says Nemeth. “There are certain guidelines that are put upon the reservoir operators and I think things are pretty well in hand.”

That doesn’t mean that there is not the potential for some flooding across the region. The National Weather Service has issued a Flood Watch for the Sierra Nevada. It specifically lists the Merced River, in and around Yosemite National Park, as a river with the potential for isolated flooding.