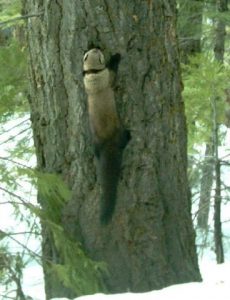 Yosemite Valley, CA– Officials at Yosemite National Park have made an unusual discovery.

The Pacific fisher is a medium-sized member of the weasel family and candidate for listing as a threatened or endangered species under the federal Endangered Species Act.

“This is really exciting because Pacific fishers are very elusive animals” said Park Ranger Kari Cobb. “There’s not very many of them that range in this area. We estimate that the population of Pacific fishers in the park is between 125 to 250 adults in the Sierra Nevada area.”

The female Pacific fisher using the currently found den, was originally captured as a juvenile in October of 2009 in the Sierra National Forest, directly south of the park. Researchers have been able to continuously track this fisher using radio-telemetry since her initial capture.

After remaining near her capture site for almost a year, she moved northward toward Yosemite. This female fisher recently moved her kits (young) from their original den, to a den in the southern portion of Yosemite National Park. This is typical behavior for a female fisher with newborn kits. The female will likely move her kits one to two more times to different dens during the next month.

The Pacific fisher is threatened by low reproductive rates, reduced genetic diversity, predators and disease.  Trapping prior to 1946 also contributed to population decline.

“The Pacific fisher is not a dangerous animal,” said Cobb. “It is a fairly small animal but of course if it feels threatened or cornered it could do some harm or bite. But generally most people who are coming to the park are never going to see one of these animals. I have actually been at Yosemite National Park for seven years and I have only seen one Pacific fisher the entire time I’ve been here. They’re amazing animals and just beautiful.”