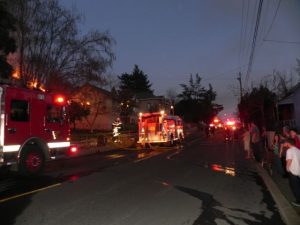 City of Sonora Fire Chief Mike Barrows reports that it originated in the living room area and quickly spread into the attic. One person was in the home when the fire started and she was able to safely escape. She was transported to Sonora Regional Medical Center because of concerns of smoke inhalation. Barrows says it appears that the fire started because the woman’s oxygen tank exploded. Neighbors outside reported hearing some type of explosion.

The fire started at around 7pm.