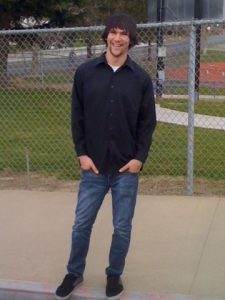 Columbia, CA– A family in Columbia were able to survive a house fire Monday night thanks to a brave high school senior.

According to Cal Fire, the fire broke out at a residence on the 23000 block of Gold Springs Drive.  Five people including two children were reportedly asleep when the fire started.

18-year-old high school student Devin Martinez of Angels Camp was responsible for calling  9-1-1 and alerting the family of the fire. Martinez says he was driving by the home at around 9:30 pm when he saw flames coming out of the chimney and roof.


“I ran out of my car and up to the front porch and started banging on the front door,” said Martinez. “I figured everyone was asleep so I went around to the other side and started to hit all the windows there and still no one woke up. I called 9-1-1 real quick and told them there was a chimney fire that probably already spread to the attic.”

While waiting for firefighters, Martinez used a garden hose to start hosing down the fire. By then the family had gotten up and was able to get out of the house safely.  Martinez says the fire department arrived in about 12 minutes.

“I got there in just perfect timing I guess,” said Martinez. “Any longer it probably would have spread and the house would be gone.  I just realized I needed to do what I was taught to do and just contain the fire and make sure it didn’t spread.”

Martinez is a volunteer firefighter in Angels Camp and also attends the Fire Academy and ROP classes at Bret Harte High School.