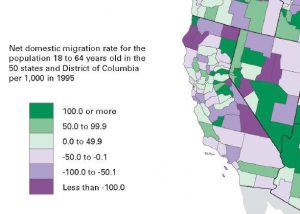 According to the newly released 2011 American Community Survey by the U.S. Census Bureau, for the 21st year in a row more people have moved away from California than have moved in.

California has experienced a net loss of domestic migrants within the United States every year since 1990. However, the number of Californians born in California that are now here is at a 110 year high of 53%. The lowest was 35% in 1930.

The percentage of people who moved throughout the U.S. in 2011 was the lowest since the information was first collected by this survey in 1948 (11.6%).

According to Census estimates there were 527,000 births in California in 2011. A preliminary report by the Center for Disease control noted 240,000 deaths. The 287,000 increase in California’s population was off set by the loss of 94,000 people who moved away.

California’s population is represented politically in the US house of Representatives with 53 seats out of 435. Reflecting California’s population trend no seats were gained in 2010 but Texas increased by four seats and Florida gained two. The number of seats in the house has been 435 since 1910, the maximum number of people per representative then was 210,000. Now each seat represents a maximum of just over 710,000 as show in an interactive chart here.

According to the 2011 report the reasons for moving were mostly housing related (44.9%). The other top reasons for moving were family related (27.9%) and employment related (18.5%). Across the nation housing was the biggest reason for inter county moves and employment was the biggest reason for moves out of state. California’s seasonally adjusted unemployment rate was 10.1 percent in October 2011, Nevada’s was 11.5% and Texas was 6.6% according to the Bureau of Labor Statistics.

A 2011 presentation with more charts based on the survey can be viewed here. The 2011 data is available here.