Begay Brings Stories Of Humor And Inspiration To Teleli 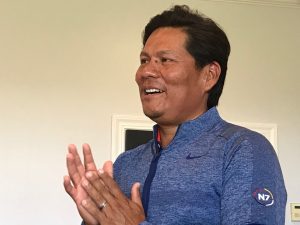 Sonora, CA — Legendary golfer, and television analyst, Notah Begay spoke to a crowd this morning at the Teleli Golf Club in Sonora.

It is part of the celebration of the opening of Teleli, formerly Mountain Springs, under the new ownership, the Tuolumne Band of Me Wuk Indians. Tribal Chairman Kevin Day introduced Begay, who is the only full-blooded Native American to ever play on the PGA tour. Day told the group on hand that every time they return to Teleli they will see new improvements, and that the Tribe is “all-in,” as it continually works to make it a top notch course, and something the community will be proud of.

Begay’s speech mixed humor and inspiration. He spoke about growing up Albuquerque, New Mexico, winning an NCAA Championship at Stanford, being a teammate and friend of Tiger Woods, and his transition into television. Click on the Video Box to view the opening of Begay’s speech.