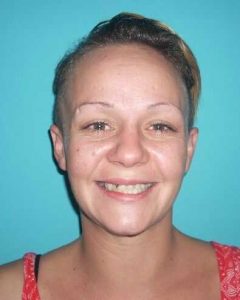 Sonora, CA – A woman who was a passenger in a stolen car that led Tuolumne County Sheriff’s deputies on a chase remains at large.

On Wednesday, a 1997 tan Toyota Camry was reported stolen from the Walmart parking lot in Sonora with a be-on-the-lookout sent out immediately to local law enforcement. A little while later, a deputy spotted a vehicle that matched the stolen car’s description with three people inside on Parrotts Ferry Road in the Sonora area and tried to pull it over. The driver stepped on the gas and sped away.

When the deputy caught up to the vehicle minutes later, the driver and passengers had ditched the car and were running into the nearby woods.  While searching the area, deputies found 32-year-old Michael McGee, who was determined to be the driver, and passenger 30-year-old Morgan Standers walking on Sawmill Flat Road. But a second passenger, 28-year-old Sabrina Wood, was nowhere to be found and is still being sought.

During a check inside the stolen vehicle, deputies turned up heroin, drug paraphernalia, Standers’ purse and Wood’s ID along with other personnel items of hers.  Sheriff’s spokesperson Sgt. Andrea Benson suggests, “If Wood wants her belongings back, she’s welcome to come in and claim those items at the sheriff’s office anytime.”

Wood already has several drug warrants out for her arrest. Of note, she was also one of the ten people arrested in the raid on the Rosalinda’s Gentlemen’s Club near O’Byrnes Ferry Road in Jamestown in March of last year, as reported here.