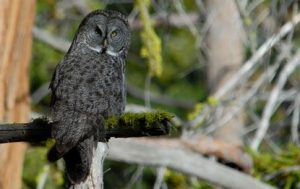 Yosemite, CA — Yosemite National Park is stepping up its efforts to study the endangered Great Grey Owl species. The park has around 150 of these owls, 65 percent of the species in the state.

The park and researchers from the U.S. Forest Service and the University of California, at Davis, are using a new method to study the owls. It’s called a passive recording device which is put along the edges of meadow habitats, where the owls are believed to nest.

Park Ranger Kari Cobb says “The recording device allows researchers to listen for clues to help them locate the owls and their nesting sites and discover new characteristics of the owls.”

Park Officials say the device not only helped them learn a new habitat for the owl, but also tracks their moves. Using the device researchers found a nest in a lodgepole pine snag with two small juvenile birds. Cobb says “This is the first recorded instance in the state of California that a nest was located in a lodgepole pine snag, as opposed to the more customary fir snag.”

Park Officials also say after a summer windstorm, one of the nests snag had fallen over and researchers assumed the baby birds had been crushed. They say using the passive recording devices researchers were able to confirm all the babies survived the fall and were continuing to be fed by both parents.

Park Officials say another study method they use is to collect the owl’s feathers and do DNA test to check on their health, survival rates, and reproduction patterns. They say it also help them to recognize and minimize negative impacts on the sensitive Great Gray Owl population in the park.

The Great Gray Owl is on the California State Endangered Species and is a large-bodied raptor that is also found in Asia and Europe. However, Park Officials say research has shown that the Sierra Nevada is home to a genetically distinct population of Great Gray Owls, with the proposed subspecies name of Strix nebulosa yosemitensis.