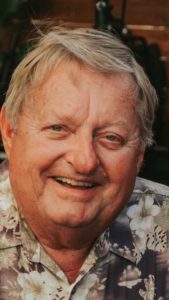 Sonora, CA — A community leader and champion of the local Meals on Wheels program has passed away unexpectedly at the age of 74.

According to his wife Linda, Robert “Bob” Edwards, 74, died last Wednesday in Sonora after going into the hospital for some surgery. A title insurance industry professional for nearly 50 years, he spent 22 of them at Yosemite Title.

Active in several community groups, Bob was a 22-year board member of the Meals on Wheels program. “Meals on Wheels was his biggest thing he worked with and he helped get the small-business league up and running about five years ago,” Linda shares. A member of Sonora Elks, Moose and SIRS, we enjoyed golfing, fishing, bowling and taking trips in his RV.

Seattle-born in December 1944 to a Navy family with Central Valley and Pacific Northwest roots, Bob and his family relocated to Modesto shortly afterwards and lived there for more than two decades. A Downey High School 1962 graduate, Linda says he loved to tell people that he went to high school with filmmaker George Lucas. Bob served for several years in the National Guard. After meeting Linda, his mother’s hairdresser at the time, they married in August 1969 and in 1986, relocated to Sonora with their three young children, all who eventually graduated from Sonora High.

“He loved it up here,” Linda says. “It’s such a great community — and so supportive when there are any troubles at all.” Along with Linda, he is survived by his daughter and son-in-law, Amy and John Flick of Walnut Creek; daughter, Marcy Rylant of Copperas Cove, TX; son and daughter-in-law, Rob and Lisa Edwards of Sonora; four grandchildren; and a brother and sister-in-law who reside in College Station, TX.

There will be a celebration of Bob’s life on Saturday, June 8 at the new Teleli Golf Club (17566 Lime Kiln Road) in Sonora. In lieu of flowers, the family suggests donations to Sierra Senior Providers (540 Greenley Road, Sonora, CA 95370), which delivers the Meals on Wheels program.