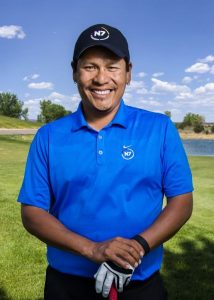 Sonora, CA — As part of the celebration of its recent opening, Taleli Golf Club will host an event featuring the only full-blooded Native American to play on the PGA Tour, a four time winner, Notah Begay III.

Begay, who helped lead Stanford to an NCAA Men’s Golf Championship in 1994, turned pro in 1995. He had four PGA tour wins between 1999-2000, including the Reno-Tahoe Open, Michelob Championship at Kingsmill, Fed Ex St. Jude Classic and the Canon Greater Hartford Open. In addition, he was the third player in the history of professional golf to shoot a 59 in a professional event, and he partnered with friend Tiger Woods during the 2000 President’s Cup.

Beyond the course, he has stayed active with the Notah Begay III Foundation, which was launched in 2005, and helps Native American youth battle obesity and diabetes.

Begay will be at the Taleli Golf Club (former Mountain Springs) for a meet and greet event, this Friday, May 31, at 9am. It is free and open to the public, and it will include a question and answer session.