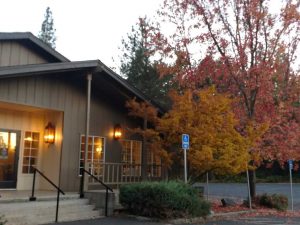 Murphys, CA — Citing the public and economic benefit, and a recent boost in momentum and talent, the Murphys Creek Theatre has been granted a notable extension to use the Black Bart Playhouse.

Last year the Calaveras County Board of  Supervisors approved only a one year extension, but today voted to bump it up to five years, continuing through May of 2024. The playhouse, located near downtown Murphys, is owned by the county. Under the terms of the agreement, the theater group will continue to pay an annual lease of $1 per year and be in charge of all needed maintenance and upgrades. This latter aspect of the contract annually saves the county around $6,000, as it covers things like roof repairs and HVAC upgrades.

Citing some recent momentum, Blaire Wiley, President of the Murphys Creek Theatre board, said, “We’re doing our best and we think it is working. With Stage 3 (playhouse in Sonora) closing, we are able to attract a lot of talent. We keep getting more and more talented people to work for us, and it is only getting better. If you’ve seen the productions over the past couple of years, you have seen the difference.”

Last year alone, there was a sizeable amount of renovations and improvements, at the playhouse, costing the non-profit theater group, and its donors, an estimated $80,000.

Supervisor Dennis Mills thanked the organization and its many volunteers.  “Great job to those that are part of the playhouse and thank you for the work you do for the community.” Al Segala, with the Calaveras Taxpayers Association, added that the agreement is a good example of county partnership. Supervisor Merita Callaway voiced support and stated that she is regular attendee of the events, and Supervisor Gary Tofanelli was praised for being on stage as a performer during one of the shows.

The contract extension was put together by the county’s economic development director, Kathryn Gallino, and the supervisors were all in favor of the minimal, subsidized, rent agreement, as having active theater group creates a positive economic trickle down impact in the community.  County documents indicate that the building has a market rate lease value of around $19,200 per year.

The new agreement was approved, 5-0. The organization has been utilizing the site since the 1980’s.