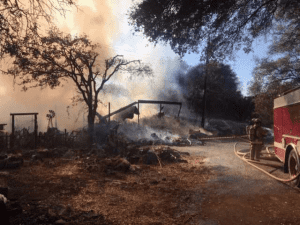 Sonora, CA — The Tuolumne County Supervisors heard an update about actions taken ahead of the dangerous summer fire season.

At this morning’s meeting, OES Coordinator Liz Peterson noted that a committee formed by the supervisors, a Fire and Community Resilience Task Force, recently identified the six most significant threats to focus on locally.

They include reducing heavy fuels, having a plan for school children if a nearby fire breaks out, addressing the lack of individualized community plans, look at narrow road easements, address limited ingress/egress problems, and improve water infrastructure for fire flow.

Throughout this month, roadside chipping is taking place along many of the major roadways, including Ferretti, Tuolumne, Cherokee and Priest Coulterville. In June, work will begin on Phoenix Lake Road. The work is being conducted thanks to a California Climate Investment Grant, in partnership with the CAL Fire Baseline Conservation Camp crews.

Also, the county is working with the Highway 108 and Yosemite Foothills fire safe councils, and Area 12 Agency on Aging, to develop a program that will help senior residents with defensible space. It will initially focus on the five priority communities of Ponderosa Hills, Cedar Ridge, Campo Seco/Campbells Flat, Fir/Meadowbrook Drive and Big Oak Flat.

Another positive that Peterson noted is that a volunteer Groveland Community Emergency Response Team (CERT) has been formed. They will receive training and help emergency responders during times of crisis. Both the community of Twain Harte and the Tuolumne Band of Me-Wuk Indians have similar organizations in place.

During the discussion, CAL Fire Chief Josh White stressed fire prevention. He noted that temperatures were starting to increase earlier this month, and fuels were drying out, ahead of the recent heavy rains. “This blessing (rain) is not going to last for long, and soon we will be right back into those increasing temperatures, fuels and low humidity.”

Chief White spoke of the need for the community to be more aware of the most typical causes of wildfires, whether it be a vehicle’s catalytic convertor, or mowing dry grass. He added that over the past month there have been about 10 escaped debris burns that resulted in citations. He also praised the notion of more volunteers, like the CERT teams, getting involved.

Board of Supervisors Chairman Karl Rodefer indicated that a discussion needs to come soon regarding ways the county can ensure that residents are complying with defensible space requirements. He floated the idea of not allowing people to rent out their homes via avenues like Airbnb unless they are in compliance. This could help curb the issue of part-time residents leaving their properties to be overrun by vegetation.

There was also concerns voiced about Ponderosa Hills, and the need for improvements on nearby Mount Provo Road. The county will look at ways to improve that path, which may require cooperation with property owners. It was noted that there are around 260 homes in Ponderosa Hills. Supervisor Anaiah Kirk voiced the need for urgent action. Several property owners were on hand at the meeting concerned about there being only one major way in and out of the subdivision.