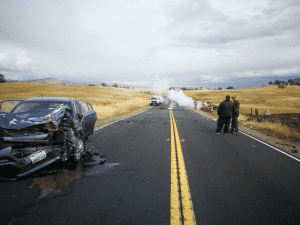 Sonora, CA — A still-to-be-identified woman perished in a horrific two-vehicle crash over the weekend along a Mother Lode highway near the Tuolumne County line.

Olsen states preliminary investigation indicates that the Nissan driver was eastbound as the driver of a 2016 Subaru, 40-year-old Carrie Nau of La Grange, was traveling west and that for unknown reasons at this time, the Nissan crossed into the opposing lane. At that point, the front of the Subaru struck the left rear of the Nissan, which propelled it off south roadway edge and it subsequently caught fire. The driver was unable to get free.

Nau and her four passengers sustained minor injuries. Responders took her to Memorial Medical Center while the others, 29-year-old Chad Laird of La Grange along with three children aged between one and four years old and all from Modesto, went to Emanuel Medical Center. Olsen says that it was indeed fortunate that all five Subaru occupants were properly wearing safety belts and/or restrained in age-appropriate child safety seats, which minimized their injuries.

Travelers reported being detoured from Highway 132 to Bonds Flat Road while the accident scene was cleared and investigated.