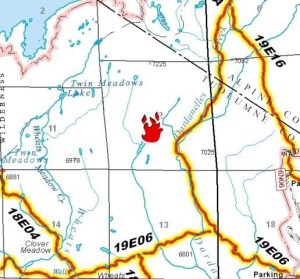 The “Wheats Fire” in Stanislaus National Forest is now 260 acres and 80 percent contained. Forest Officials say full containment is expected by the end of today meaning they will have a fire line around the blaze. They expect to have full control by August 15th.


Forest Officials say one threat is the possible thunderstorms that could move into the area over the next few days. They say under less severe conditions they would take advantage of a natural fire start to achieve resource benefits, however, current local conditions increase the potential for severe fire behavior as it’s the start of the historic high fire danger period for this area.

Forest Officials are concerned with serious drought conditions over much of the U.S., if the fire grew or moved toward high population recreation areas, fire crews and aircraft could become scarce when needed most. They are also a concern about air quality during the current local heat wave.

Forest officials say smoke has been reported from Highway 108 in Tuolumne County and may been seen from Highway 4 in Calaveras County. They say that smoke is coming from flames rapidly consuming red fir and sending plumes of smoke into the air at the Carson-Iceberg Wilderness. They believe the flames were ignited by a lightning strike over the weekend.

Forest officials say granite rocks and light winds are making it difficult to fully contain the blaze located west of the Dardanelles. There are 150 firefighters on the scene from both the U.S. Forest Service and the Me-Wuk Rancheria Fire Department. Forest Officials estimate the cost of the blaze to be around $360,000.