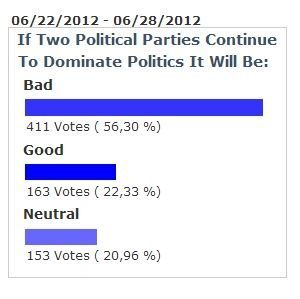 In a recent myMotherLode informal poll question it was asked, “If Two Political Parties Continue To Dominate Politics It Will Be: Good, Bad or Neutral. Fifty-six percent voted “Bad”.

In a national poll released last week by the Pew Research Center, 57 percent of Americans surveyed agreed “that there should be a third major political party in addition to the Democrats and Republicans.”

America will celebrate its 236th anniversary this Fourth of July, it is noted that President Barack Obama is from the over 200 year old Democrat political party. The history of the democrats listed at www.democrats.org. The accomplishments of President Woodrow Wilson, Franklin Roosevelt (FDR), John Kennedy and BillClinton and others.

The republican presidential nominee Mitt Romney is from the over 150 year old GOP political party according to www.gop.com.  The first Republican President was Abraham Lincoln. The Republican party website states, “Presidents during most of the late nineteenth century and the early part of the twentieth century were Republicans. The White House was in Republican hands under Presidents Dwight D. Eisenhower, Richard Nixon, Gerald Ford, Ronald Reagan, George H.W. Bush and George W. Bush.”

According to the Pew Research Center “The number of political independents has continued to grow, as both parties have lost ground among the public. Based on surveys conducted this year, 38% describe themselves as independents, up from 32% in 2008 and 30% in 2004.” Pew notes that independents are more numerous than at any point in the last 70 years. Meanwhile, the percentage of self-described Democrats has fallen from 36% four years ago to 32% today. Republican identification has remained largely stable over this period (24% today, 25% in 2008). In 1991, however, there were nearly equal percentages of Republicans (31%), Democrats (31%) and independents (33%).